If The High Cost Of Divorce Is a Concern. . .

"FINALLY:The First Practical, Step-By-Step Roadmap On How To Win Your Divorce (Without Losing Your Shirt or Kids!) Particularly If You're Confused By The Divorce Process, Division Of Assets, Alimony, Custody, Or Child Support Law

Are you a man facing a divorce? If so, I can help. 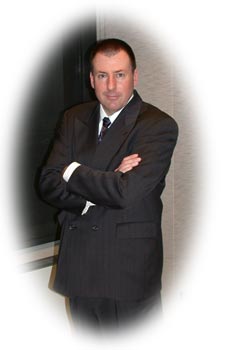 I've interviewed many divorced men...both winners and losers. I especially listened to the successful men.

How you divorce will have a major impact on the rest of your life.

Why is it that so many men struggle after a divorce while other men prosper...even thrive? Fortunately, success leaves clues.

I quickly discovered that "the more money you spend on your divorce, the worse your settlement will be." As strange as it sounds, it's true.

The men that got the best divorce results generally spent only a few hundred dollars. The men that spent thousands usually got taken to the cleaners by their ex-wives and the attorneys.

Several years ago, I went through my own painful divorce. I had to deal with issues like child custody, division of assets, and child support. I had one of the most complex divorces in state history.

I didn't have just a lawyer, I had a "legal team". I've read just about every book out there on divorce and child custody.

Most of these books are too general or full of advice that either isn't true, is irrelevant, or simply doesn't work.

I was forced to do my own research. As a result, I've become an expert on the topic of divorce.

Many men believe that winning in court is how you win your divorce. Nothing could be further from the truth.

The facts clearly show that men get the best deals when they bypass the entire legal system.

We've all been brainwashed into thinking that when we get divorced, we need to hire a lawyer and sue somebody. Let me show you a much better way!

Throwing money at your divorce simply doesn't work. In fact, it'll more than likely backfire on you.

You just want the problem fixed as quickly and painlessly as possible.

When you look into divorce law and child custody - these are the facts:

It's been said that marriage is nothing more than an insurance policy for the woman. If the marriage fails, she'll often resort to using alimony to "cash in".

Most men don't mind supporting their wife during a marriage, but once the marriage is over, having to support an ex-wife is an outrage. In many cases, she was a lousy wife and/or a bad mother.

Now she wants out of the marriage only because she suffering from a case of "the grass is greener on the other side" and suddenly you owe her.

What a crock! Sadly, this happens all too often.

As a man, you have four areas of financial exposure:

Child support is set by strict state state guidelines; alimony is not. Alimony is left up to the discretion of the judge. The judge will impose whatever they feel is "fair."

This means men in the exact same situation, can pay significantly different amounts of alimony. So what separates the men that get good alimony deals from the men that get screwed? More often than not, it's your strategy, not your income or finances that determine if you owe alimony.

Your strategy and approach determines how much (if any) alimony you pay - more so than your financial situation or hers.

There are things you can do about alimony.Taking a common sense approach and applying some simple yet effective strategies is your best defense against alimony.

If you think that hiring an expensive attorney is a winning strategy, think again. That's what Paul McCartney did and he had to pay millions in alimony. Why do you think your outcome will be any different? Hiring a lawyer or going before a judge and hoping for the best is always a losing strategy.

What Happens To Children In Fatherless Homes?

Children growing up in fatherless homes are:

It's imperative that you remain involved in your children's lives...even if your ex-wife is trying to push you out.

"Fathers should not have to fight in court and pay thousands of dollars simply to maintain the same level of contact they had with their children before the divorce."

Hot Tip: Insist that a portion of your child support be set aside for the children's education. If you're paying $800 per month in child support, insist that $150 of that be deposited directly into an education account for the kids each month. Suggest that your ex-wife match your $150 with $150 of her own each month.

This will show you to be a caring father and if she objects, it'll expose her as a greedy woman and an uncaring mother. At least you'll know a good portion of your child support payments are benefiting the kids and not her.

Dealing with divorce lawyers is like dealing with auto mechanics - because they're both . . .

Would you spend thousands on your car without understanding everything your auto mechanic was doing? Of course not. You'd question everything. Why should your divorce be any different?

The problem is that most men don't understand divorce laws well enough to question their attorney. Why would you?

How many divorces have you been through? Most men don't take the time to educate themselves on divorce laws and custody. They simply rely on their attorney.

Have you ever walked into a place like Home Depot planning to spend $10 but ended up spending much more than you planned?  It happens all the time.

It happens all the time in divorce too. You plan on a civil divorce costing no more than $500. Three weeks later, you're locked in a legal battle with your ex-wife and you've charged $4,000 on your credit card for your attorney.

Few men plan to blow thousands on their divorce, but that's exactly what many end up doing!

Divorce attorneys are experts at separating you from your money. Never forget that

How do men fall into this trap?

Want to stop your wife from hiring one of the best lawyers?

Hot Tip: To stop your wife from hiring the best attorney in town, simply book an initial consultation with the top 5 attorneys in your area. These 30-minute consultations are almost always free. Even if you don't hire any of them, once you've met with these attorneys, they are legally prevented from representing your wife!

She can't even speak with them. It's a great tactic, it works, it's free and it works in all 50 states!

What about Taxes and Divorce?

I'm constantly amazed at the number of men who never consider the tax implications of their divorce. Sadly, most divorce layers know little about tax law.

Too many men spend hundreds of dollars fighting about $10 worth of monthly child support and then walk away from $3,000 of tax deductions simply because they didn't know any better.

If you don't know what you're doing, you could be in for an ugly surprise this spring. A good tax strategy should be the cornerstone of any divorce settlement.

I'm a consultant to Fortune 500 corporations. I get paid to analyze complex situations and recommend a course of action. The fortune 500 executives I work for want answers, not a long story. They want a course of action and solutions they can implement tomorrow, not a 300 page book.

This is exactly what I've done for you. I've used my highly sought after analytical skills to create an "action guide" for men going through a divorce.

I call it: "No BS Divorce Strategies for Men


I created the very action guide I relentlesly searched for when I went through my own divorce.

It tells you everything you need to know and skips all the BS. It’s like getting a top lawyer, a tax advisor, and 10 books all rolled into one easy to read report.

It’s short and to the point because it’s written by a divorced man for divorced men. I give you answers, not legal jargon.

Like a fortune 500 executive, you need to take action now. You want answers, not a research project. You want good advice and a plan of action, not piles of irrelevant information.

You want a clear plan for your divorce that you can act on now! I can get you there in about 90 minutes. I'll tell you everything you need to know.

I've done all the research for you. I've read nearly every divorce book out there. I've studied the laws, interviewed divorce attorneys, and spoken with courthouse personnel (both on and off the record). I condensed it all down to into an easy to read report. 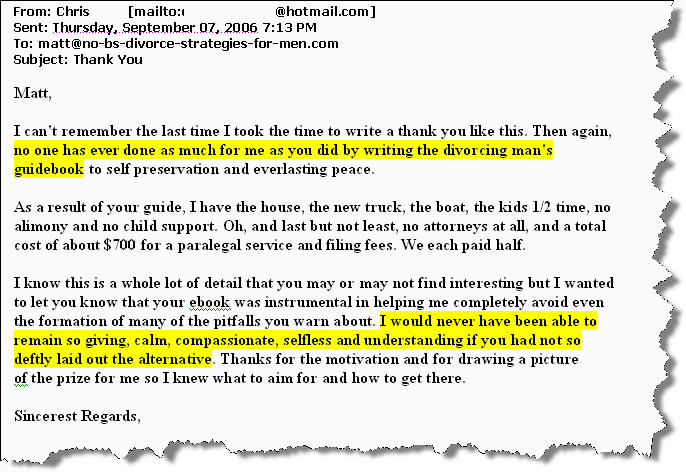 There are two ways you can go through your divorce:

A Video Message from Matt O'Connell

Order now and in just 2-3 hours, you can have the same knowledge it took me years to accumulate.

If you want a successful divorce, you need to take action. Don't depend solely on your attorney. You'll be disappointed in the end. You need to take responsibility for the success of your divorce. Nobody cares more about the outcome than you do.

There's Absolutely No Risk To You

There is no risk to you. I'm so confident that my strategies will , save you thousands on child support, reduce your legal fees, get you a better custody deal, and lower your stress level, that I'm willing to let you test my strategies for up to 6 months without risk or obligation.

I'm offering you a no questions asked, money back guarantee.

Try my techniques first for only $49.95. Read my advice and try my techniques. If you don’t feel they're worth the price, I’ll give you a full refund. Will your lawyer do that?

Doesn't it make sense to try my techniques first? If you don't like what I have to say, the lawyers and the courts will still be there tomorrow.

Order your copy now and in minutes, you'll be much more informed than you are right now.

Choose the Option That's Right for You


Thank you, now let's get going!

P.S. Don't kick yourself tomorrow, next week, or next month after you've handed $1,000 or $2,000 to a lawyer with no guarantee of success - or been screwed by the system and your ex-wife because you didn't invest a paltry $49.95 now.

P.P.S.You owe it to yourself to save as much money as possible - because your ex-wife and her lawyer are hoping you don't. If just one of my techniques and strategies work for you, then you willl have saved hundreds...and likely even thousands in wasted legal fees.

P.P.P.S.Try my advice and techniques. Use them for 90 days and see if they're worth what your lawyer is charging you for 15 minutes of his time, and if not - I'll give you a no questions asked, full refund.

Is your lawyer offering you a 6 month money-back guarantee?